Certain historians believe that Poker’s origins can be traced to a domino-card game from 10th century China. Others say that it is descended from As Nas, a Persian card game popular in the 1500s. Whatever the exact date, there’s been more than enough time for it to have evolved into many different variations, all of which are available online.

Texas Hold’em is a vastly popular Poker variant. Each player gets two cards, or Hole cards, dealt to them facing down. Five community cards are then dealt facing up over three stages of play. These stages include an initial series of three cards, followed by the addition of one, and then finally a last one being added.

This community-card Poker game is very similar to Texas Hold’em. Each player gets four cards and must then make the best card combination they can using two of them along with three of the five available community cards. 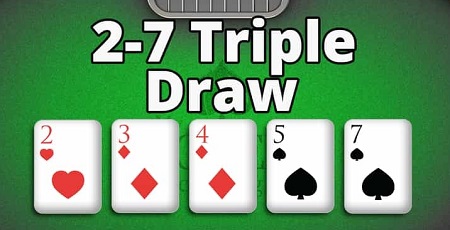 Deuce to Seven Triple Draw sees the player with the best low hand winning the pot. Everyone gets dealt five cards at the beginning of the game and can then discard any of these, exchanging them for new ones during three distinct draw rounds.

Badugi sprang up in Asia and is a Draw Poker variant that shares many similarities with Lowball, with the least valuable hand winning. The hand-ranking system in Badugi is very different from other Draw games, however, and it’s played with just four pocket cards. The best possible hand is the 4-3-2-Ace combination.

H.O.R.S.E. is great if you want to flex your Poker muscles in a range of variants. Its name is an acronym for the five different games it includes, Hold’em, Omaha Hi/Lo, Razz, Stud, and Eight or Better.

The game type changes with each round of play, kicking off with Fixed Limit Hold’em and then moving on to Omaha Hi/Lo and the rest of the variations. If you start off as the Big Blind in the Hold’em round, by the time your next Big Blind comes along you will have switched to Omaha Hi/Lo. When the Seven-Card Stud Hi/Lo round has finished, things flip back to Fixed Limit Hold’em and the cycle gets repeated. If you’re unsure which variant is currently being played you can just take a peek at the table window’s top border or the table itself.

When the game changes from Omaha Hi/Lo to Razz, you’ll see the button freeze. This ensures that, when everything comes back round to Hold’em, nobody can skip the Blinds or has to pay extra.

A form of Stud Poker, Razz is usually played for Ace-to-five low. It’s one of the oldest variations and we’ve been enjoying it since the 1900s. It came about around the same time that people substituted 52-card decks for the 20 used before then.